EPIC is more than just a name; it is an acronym describing the primary capabilities in the system. In this blog post, we’ll look more in depth at the P for programmability.

With today’s traditional PLC systems, you typically have one fixed development system with a limited set of tools. This is a burden that most engineers have had to suffer with. Oftentimes, you have to use inefficient workarounds to programmatically accomplish what is needed for different components of a given industrial automation application. 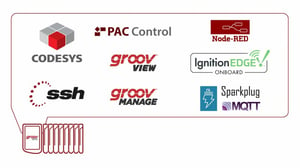 With the groov EPIC® system, we’ve added lots of options to help you with development, primarily in the form of multiple programming choices and extensibility of those programming environments. Our goal is to provide you with an industrial hardware platform with plenty of software tools, and then get out of your way.

To date, we provide several programming tools, including:

We recently hosted our first EPIC Premium Factory Training “soft launch,” and as we were wrapping up, we had a question-and-answer panel. One comment from one of the students stuck with me: The new CODESYS development system appears to be very extensible.

For reference, extensibility is a term used to describe software design where expansion of the environment is accounted for, and allowed to happen, via enhancements that typically minimize the impact to the functionality of the system as a whole. This particular training class included several advanced programmers who were very familiar with our existing
Opto 22 environment, PAC Control. To hear this comment made me think about why; not just why the CODESYS development system is extensible, but why it’s so important.

CODESYS, unlike most IDEs in the industrial space, is very open. It allows for module creation to fit a need. They have their own CODESYS Store, and when you scroll through the 190+ modules, you can see what makes CODESYS unique. There are modules for the basic fieldbus protocols and communications drivers: Modbus, ProfiNET, EtherNet/IP. They also have included more niche communication modules like BACNet and EtherCat as well. Branching out from the industrial space, there are modules for SQL access and even web access, including Twitter. You can even create your own modules.

You can quickly start to see how this is different from the standard industrial programming environments, and how it is similar to a popular SCADA software package called Ignition.

All of these features and abilities of the software are a very modern approach to an often antiquated solution. We are moving out of the traditional sandbox environment, and onto a massive jungle gym of options.

One other open feature for CODESYS is the OSCAT Library. The OSCAT Library, or Open Source Community for Automation Technology library, is an open-source library referenced to the IEC 61131-3 standard and ported to all IEC 61131-3 compatible programmable logic controllers. It contains over 500 functions in the following fields:

These are open-sourced functions that allow programmers to not only utilize the functions, but customize them to fit their applications. All source material is contained and easily modifiable.

Also, using the CODESYS environment gives you not only functional extensibility, but device extensibility. There are over 350 devices that utilize CODESYS on board. These devices are not just traditional controllers, but also HMIs, gateway devices, variable frequency drives, and motion controls. With this, you can easily integrate and interface the groov EPIC system with other hardware for total integration.

Anyone familiar with these devices will have an advantage when using groov EPIC and integrating into their environment. These open-source/open-device concepts are becoming more prevalent in the industrial space. I believe we will see even bigger shifts, as software programming archetypes and IT standards bleed into the industrial area, and with the push for connectivity and IIoT, we will have more and more velocity behind this movement.

One thing is for certain: this new (to our industry) way of thinking is going to be an eye opener for many of the traditional Integrated Development Environments and methodologies that are entrenched within the traditional industry procedures and engineering minds.